Welcome to Niseko About Niseko

Niseko is charming town
surrounded and blessed by nature
with a very alive history and culture. 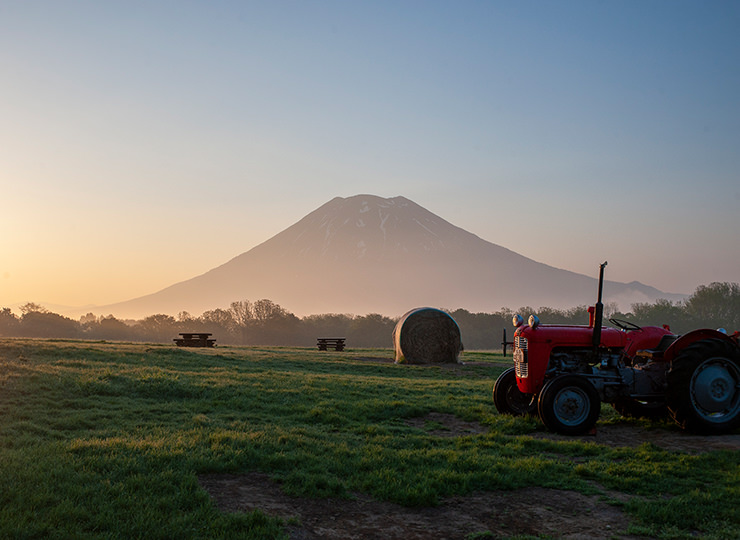 The "Origin of Niseko"

The word ‘nupuri’ also comes from the Ainu language and means ‘mountain’. Niseko-Annupuri’ - where the ski slope is located - means ‘mountain with a (river which runs around the bottom of a) sheer cliff’. As the name contains the word for mountain it is not called ‘Mt. Niseko-Annupuri’. Though many place names in Hokkaido are rooted in the Ainu language most of them are written using kanji characters. It is said that though the Japanese who settled in Niseko during the Meiji period (1868-) recorded the Ainu place name using the kanji script it didn’t catch on and the katakana script came to be used instead.

The Renaming of the town Niseko

In 1963, the Niseko-Annupuri area was designated ‘Niseko - Shakotan - Otaru Kaigan Quasi-national Park’. At this time,the national railway station (now JR) was still called ‘Kaributo Station’ and as a result moves were made to change the name of the gateway to Niseko to ‘Niseko Station’. However, as the national railway company was reluctant to change the name to one written in the katakana script, efforts swung towards renaming the town and, in 1964, the town of ‘Niseko’ was born.

The song in Niseko was established in November 1972.
The Niseko town asked for their citizens to write the lyriks for offical town song and from 65 entries Mr. Mori Kikuzo's entry was chosen. Based on the lyriks from Mr. Mori, composer Komabayashi Shoichi composed the whole song.

Niseko Town (42°52’ N and 140°48’ E) is located in the west of central Hokkaido almost in the centre of Shiribeshi Subprefecture. It lies in a gently undulating basin with the 1,898m Mt. Yotei in the national park to the east and the 1,309m Mt. Niseko-Annupuri in the Quasi-National Park to the north.
Flowing through the town is the Shiribetsu River whose tributaries include the Konbu, Niseko Anbetsu and Makkari rivers. The area has an inland climate with an average temperature of 6.3°C and, in winter, the town can see snow accumulate to a depth of as much as 200cm.

Around 200 households farm 2,000 hectares of land with an annual production of just under three billion yen. Main crops include potatoes, melons and asparagus, particularly well known for their quality and taste, and rice, tomatoes and lily bulbs. With Niseko’s distinctive characteristics being used to promote agriculture and through the improvement of profits, furthering of environmentally friendly ‘Clean Agriculture’ and support for direct farm sales, the agricultural industry is experiencing a period of revitalisation.

The Niseko district has areas designated as both National and Quasi-National parkland and is a year-round tourist resort blessed with scenic countryside reflecting the beauty of all four seasons. Summer invites visitors to try outdoor sports such as hiking, canoeing and rafting while in winter they throng to the large ski resort for its world-famous, top-quality snow and winter sports. The area is also dotted with many hot springs of differing mineral content and offers plenty of accommodation such as hotels and B&Bs each offering its own personal touch.

Located at the foot of Mt. Yotei is the well-known Arishima area - farmland that was first cultivated by the father of the famous early twentieth century author Takeo Arishima. Takeo let his tenants use the land free of charge and his legacy of ‘mutual aid’ lives on in Niseko to this day. In 1977, to celebrate 100 years since his birth, the Arishima Takeo Memorial Museum was built on the original site of the farm. As the museum plays a central role in the dissemination of local culture, it receives many visitors.

Agricultural products are brought up by the blessings of nature, such as climate, and the wisdom and experience of farmers.
Niseko's climate is also relatively mild and the temperature difference between day and night is large. All these attributes lets the crop grow gently and gives it a distinctive taste.
Vegetables are things we eat every day and we want them to be not only safe to eat but also delicious.
Niseko's vegetables meet those needs!
Niseko's main crops are potatoes, rice, melon, asparagus, tomatoes, lily roots, pumpkins, and beans, but they also cultivate various crops in small quantities.
These vegetables are sold at the farmers market and you can taste them everyday in Niseko, as they are used as ingredients in most of our restaurant.
We also sell Niseko's delicious, low-protein, delicious rice under the brand name “Toku-Okimai”.
In the past Hokkaido rice had a bad reputation but it is all different now! Now, Hokkaido rice is known all over the country for it's delicious taste and structure.
It is a taste that you should definitely try!

The pride of Niseko, our best quality snow.

After Takeo Arishima published works like "Cain's descendants" and "Born troubles", where the plot is cantered around towns of Hokkaido such as Niseko (formerly Kaributo) and Iwanai, his position as a writer was set.
Takeo Arishima, together with Naoya Shiga, Minoru Mushakoji, Ikuma Kuma Arishima, and Satomi Petonra, Joined the "Shirakaba Movement", which was established In 1873.
He was known as a humanism writer the most and is the representing author of the Shirakaba Movement. His masterpieces include the novel "A Woman", "Constellation", the fairy tale "Ichibun no Grape Grapes", and the criticism "Responsibly grabs love".

Takeo Arishima has taken over a vast farm from his father. My father, Takeshi, has set aside a large farm in Niseko by leasing the land under the National Landfill Law, considering the future of the children. Pre-war peasants accounted for 30 to 40% of the harvest, and peasants were forced to subordinate to landowners and live poorly. Takeo considers the private property of the land to be guilty and tries to regenerate his creations. In 1922 (Taisho 11), he gathered peasants at Yasho Shrine and declared the free release of a vast farm inherited from his father. The released farm was jointly managed by peasants and continued until the post-war land release. This event has had various repercussions for the society at that time.

The masterpiece of Sister, a representative work of Niseko town-related writer, Fumi Nishiyanagi, is based on the Oji Paper Shiribetsu Daiichi Power Plant, located about 2 km upstream from the Niseko Station on the Shiribetsu River. This work became a TV drama of NHK.

This facility was constructed in 1873 by Oji Paper Co., Ltd., which built a paper mill in Tomakomai City, to secure power to operate the mill. The weir behind Niseko Station is the facility of the No. 2 power plant, and there are two Oji Paper power plants in Niseko town. The electricity generated here was sent to Tomakomai via transmission lines, but since April 2010, it has been transmitted to the Marunouchi Building in front of Tokyo Station.

Until 1967, an express Niseko train operated by the SL "C62" in Niseko was running on the JR Hakodate Main Line. One of them, the C62-3, was kept static at the railway memorial in Otaru, but was revived in 1988, and limited operation of the SL Niseko began. From the beginning of the revival operation of the `` C62-3 Niseko '', Niseko town has been requesting driving to Niseko station, but it has not been realized because there is no turntable for turning locomotives at Niseko station did. Therefore, in Niseko-cho, a turntable that was located in Shintoku Engine Zone in Hokkaido was relocated, and access to Niseko Station was realized from 1990 (Heisei 2). This turntable stopped operating in 1995 when the operation of C62 was suspended, and is now quietly watching the operation of the main line.

Icing experiment on a Zero Fighter

In 1943, a member of the Hokkaido University Low Temperature Research Institute led by Prof. Ukichiro Nakatani and a member of the Low Temperature Research Institute of Hokkaido University conducted the ""Niseko Summit Observatory"" to study the causes of icing accidents on military aircraft and study ways to prevent airplane accidents. Was set up. At the laboratory, a small observatory was set up at the 8th station of Niseko Annupuri, and an icing laboratory was set up at the summit. The “Zero Battle” was carried in and continued scientific research on the icing phenomenon on the aircraft.
Hundreds of Karita villagers (now Niseko townspeople) and the research institute members carried the Zero Battle and research materials up to the top of the 1,300m. It was a very difficult task and he spent four days. At the top of the mountain, there is still a pedestal that is said to have fixed the Zero Fighter, and a transmission line that sends electricity used for the motor that drives the propellers, so that anyone who climbs can see it. The Zero Fighter aircraft was abandoned at the valley floor after the war, but was recovered in 2004 and displayed at Kutchan Fudokan.

It is a designated cultural property of Niseko town.
Niseko Annupuri is located in the north and Mt. Yotei is seen in the east. It is estimated to be a grave built by indigenous people about 3,000 years ago (Jomon period), and is said to be a very valuable archeological site.

Kaributo Shrine was built in 1873. Every year from August 24 to 25, the annual festival is held, and the town of Niseko excites with a single color. Glitteringly decorated mikoshi can be walked by people in bad years. Niseko Town's intangible folk culture of Akasaka Nui's line and floats are worth watching.