Workcation:
I Did a Workcation in Niseko this Autumn! 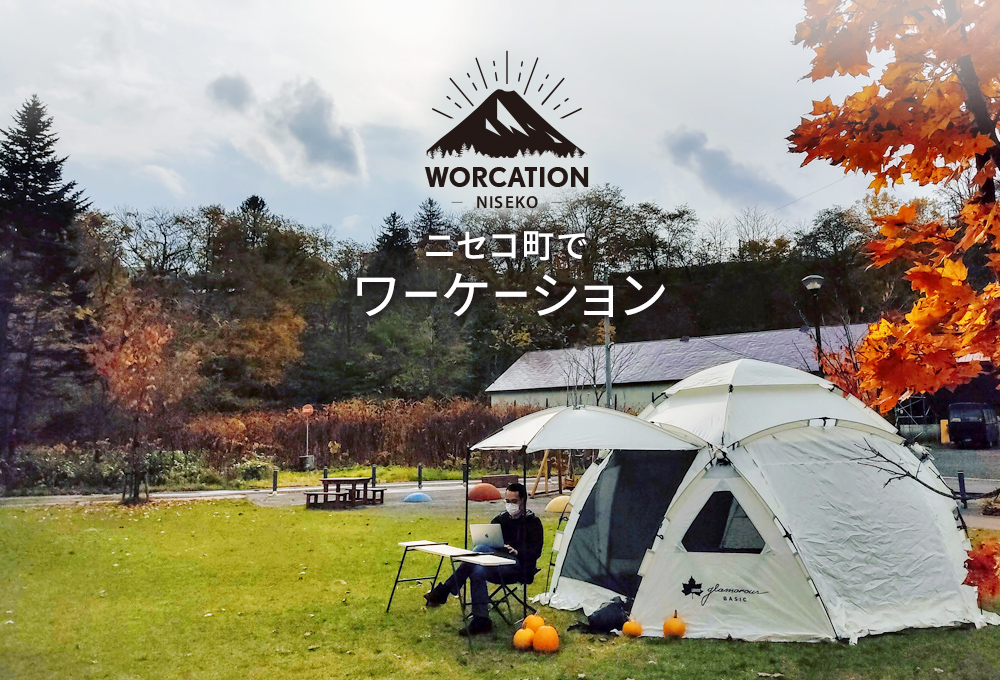 Have you ever heard the word “Workcation”?

“Workcation” is a made-up word composed from the word “work” and “vacation”. It has become a popular phrase in recent years, and the idea is to be working remotely from a relaxing location – usually a resort. This way, you can work while also feeling the benefits of a vacation.

As we are working remotely from home or rental office, this new form of working was invented to relieve stress from work while also applying to COVID-19 guidelines.

This time, the CEO of Otokoro.com, Inc, Mr. Saito, did his workcation in Niseko.

While Mr. Saito enjoyed his workcation, he used the Niseko Collection Coupon and the Niseko Yu Meguri Hot Spring Pass, to get the most out of his workcation. He came just at the right time, too! For seven days, his work environment was made of Niseko’s colorful autumn and Halloween scenery, full of reds, yellows, and orange of the pumpkins.

And this workcation is made possible by 1 Stop Business Center, which is working together with the Niseko Town.

First 1 Stop Business Center advertised this model course to their members, and with the help of the Niseko Resort Tourist Association and the Niseko Chuo Soko Gun, the project became a reality.

First, Mr. Saito arrived via bullet train at the JR Hakodate Hokuto Station, rented a car, and then drove to Niseko. He told us he enjoyed the Hokkaido-like scenery while driving to Niseko.

Right after he arrived in Niseko, he had an interview with the Hokkaido Newspaper and was asked about workcation, Niseko, and his interests.

What was his reason for trying out a workcation? Due to COVID-19, the whole staff of his company works remotely from home and all company events were canceled. According to Mr. Saito, felt there was a need for an event-like experience where all of his employees can participate, while also complying with corona preventive measures. But before he can implement workcation as part of the company’s employee welfare, he wanted to try it out himself. 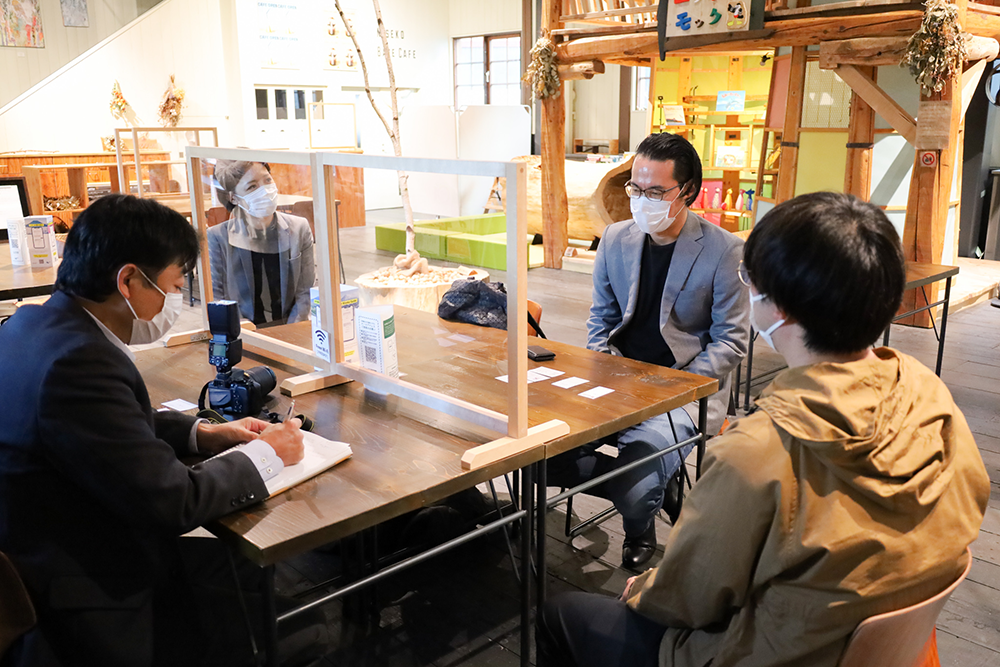 While Mr. Saito stayed in Niseko, he used the Niseko Collection to try out the many experiences the Niseko Area has to offer.

He told us he wanted to try out fishing in Niseko since fishing is one of his hobbies. So, the first thing we did in the morning was rainbow trout fishing at Niseko’s Salmon Fishing pond.

Without breaking a sweat, Mr. Saito caught a 50 cm rainbow trout; he is an excellent angler! 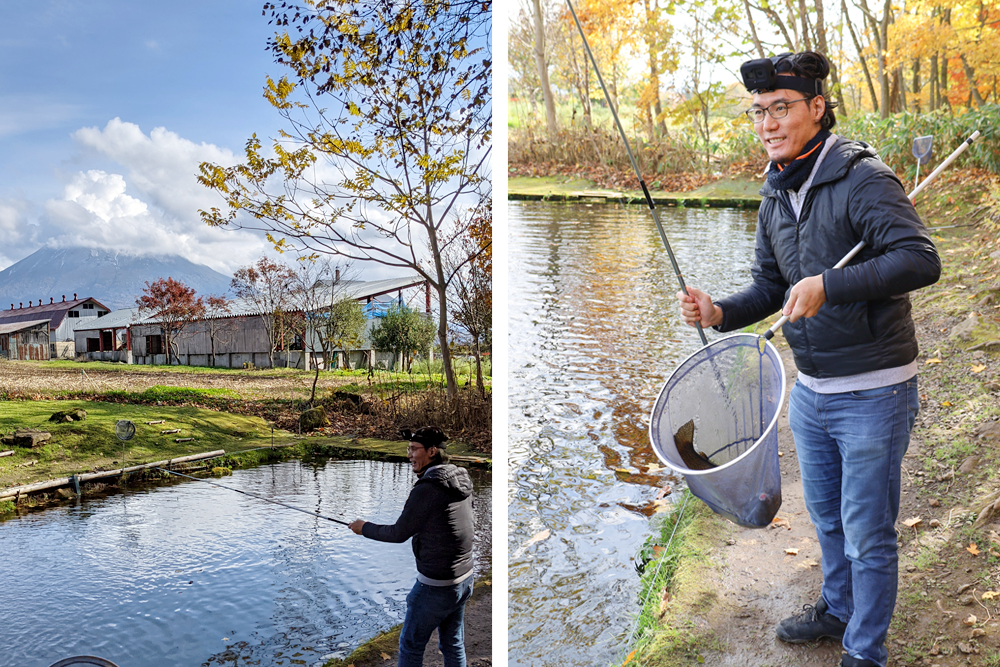 During the afternoon, working in the public space of the Niseko Town Hall’s 3rd floor. 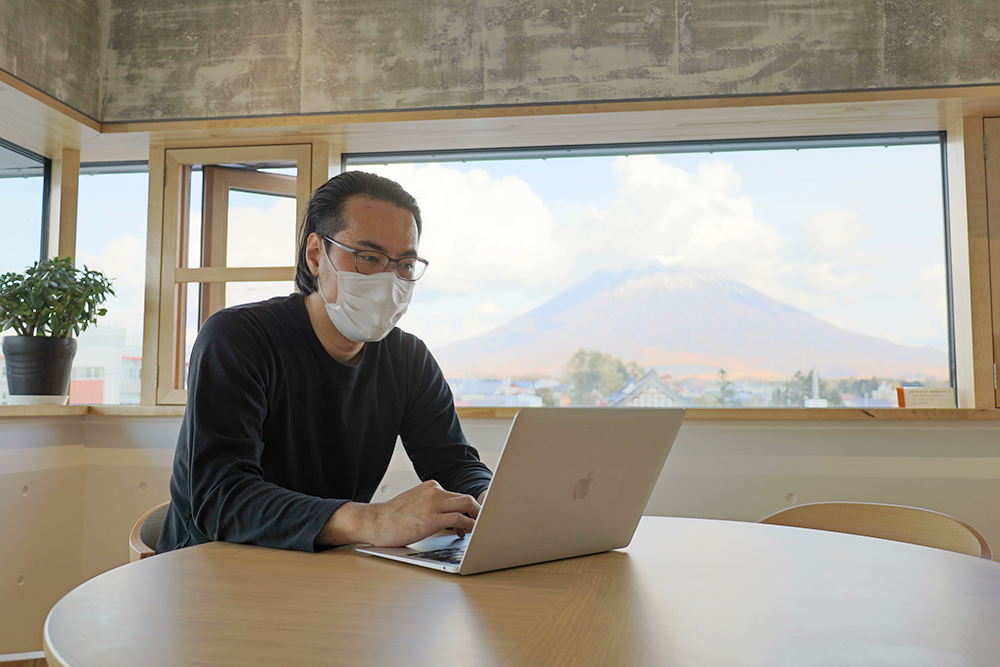 Relaxing at work in front of the beautiful Mr. Yotei scenery!

It is time to use the Niseko Collection for an activity reminiscent of Niseko, kayak on the Shiribetsu River!

There is even time to go onshore and sip a cup of tea. Now, this is how you spend your time in Niseko!

“I want to do that again! To be honest, I want to for another two hours!” says Mr. Saito with a mesmerizing smile on his face. 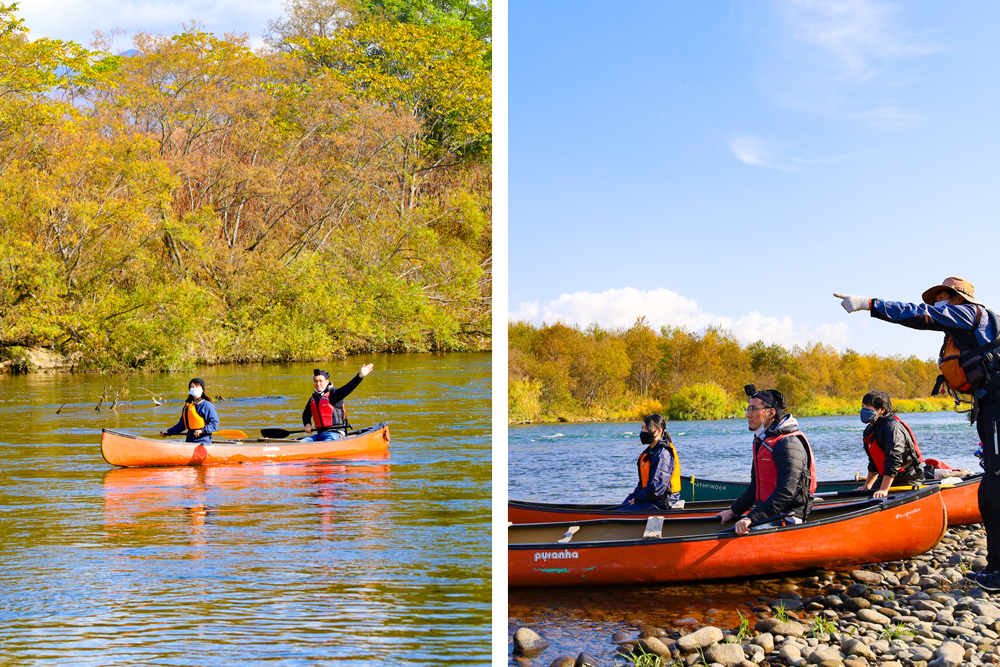 Mr. Saito’s made a scary Bat-Jack O’Lantern, and we placed it right in front of the JR Niseko Train Station. 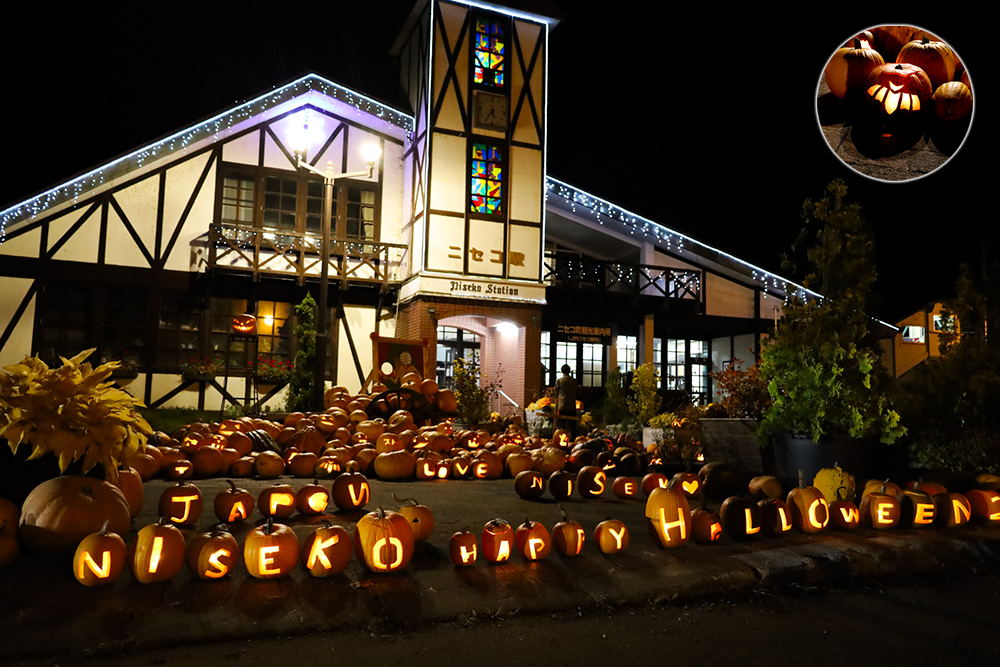 (The jack o’lantern at the right top is Mr. Saito’s)

Even though it was getting late, after the pumpkin carving, it was time for a lecture about Niseko’s SDGs commitments. The lecture was held by Mr. Terachi, who is an expert in the field.

There was a lot to unpack! From the resident’s idea of mutual aid that started the journey towards sustainability, to the town openly sharing budget spending. Much to Mr. Saito’s amazement, Niseko embraced SDGs long before SDGs were even a thing. 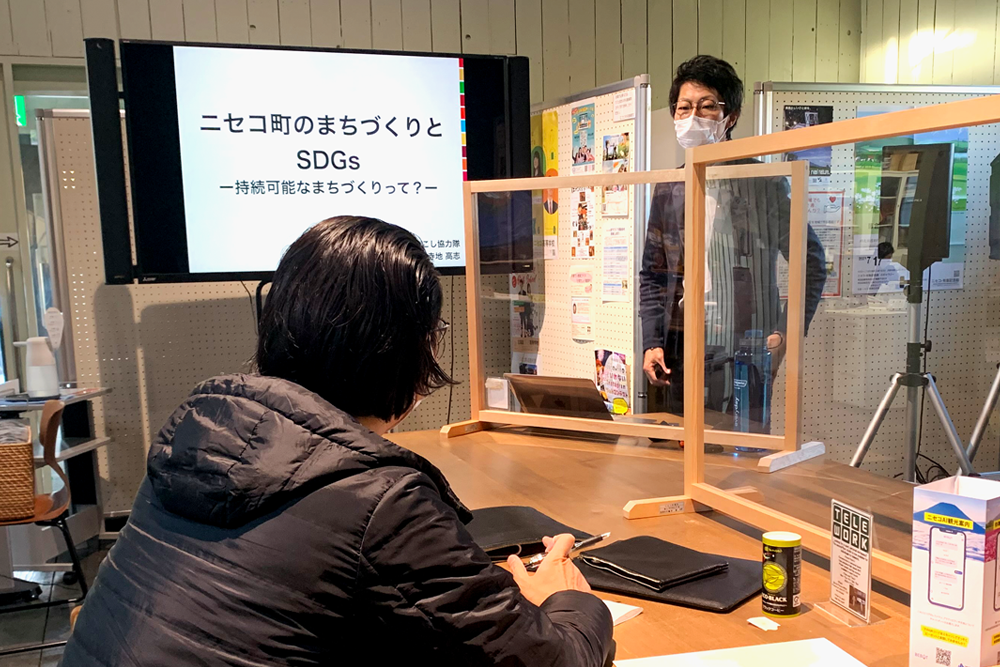 How about a Workcation in a tent?

“Just breathing Niseko’s fresh air alone is like going on a vacation. Since Niseko Chuo Soko Gun’s wi-fi is accessible even from outside, I can even work from a tent!” says Mr. Saito, working in the middle of nature. 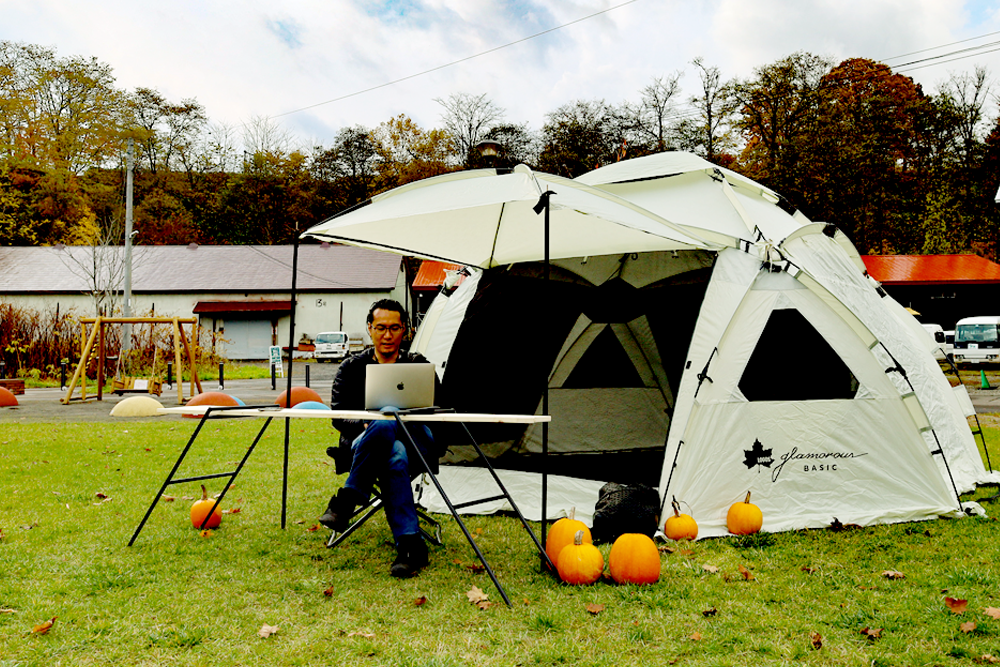 This time, we went to the Arishima Memorial Museum for our workcation. We savored a coffee from the Takano Cafe inside the museum and learned a lot about Niseko’s history.

For lunch, we chose Pi-kan ROLLPIZZA, which was much to Mr. Saito’s liking as a is a devoted pizza lover. 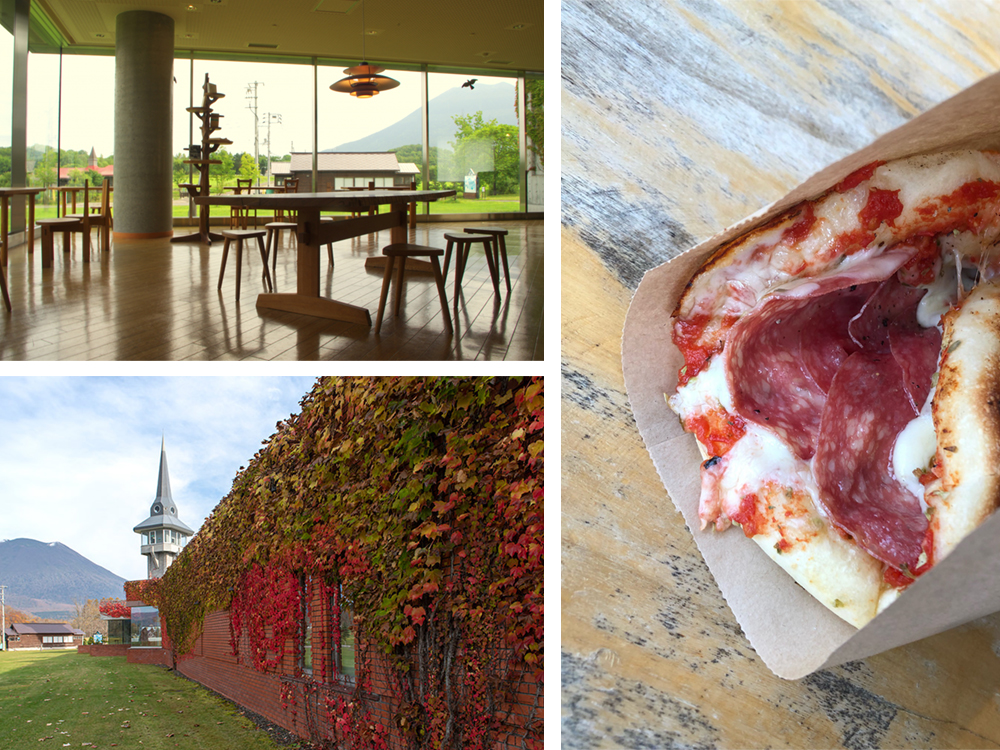 On the final day, Mr. Saito could go where ever he wanted to. To nobody’s surprise, he went to buy souvenirs! And the best place for that is Niseko’s Michi no Eki – Niseko View Plaza, a popular souvenir shop and farmers’ market, and Takahashi Milk Kobo, a local dairy farm that has several restaurants on its premises, as well as souvenir shops. 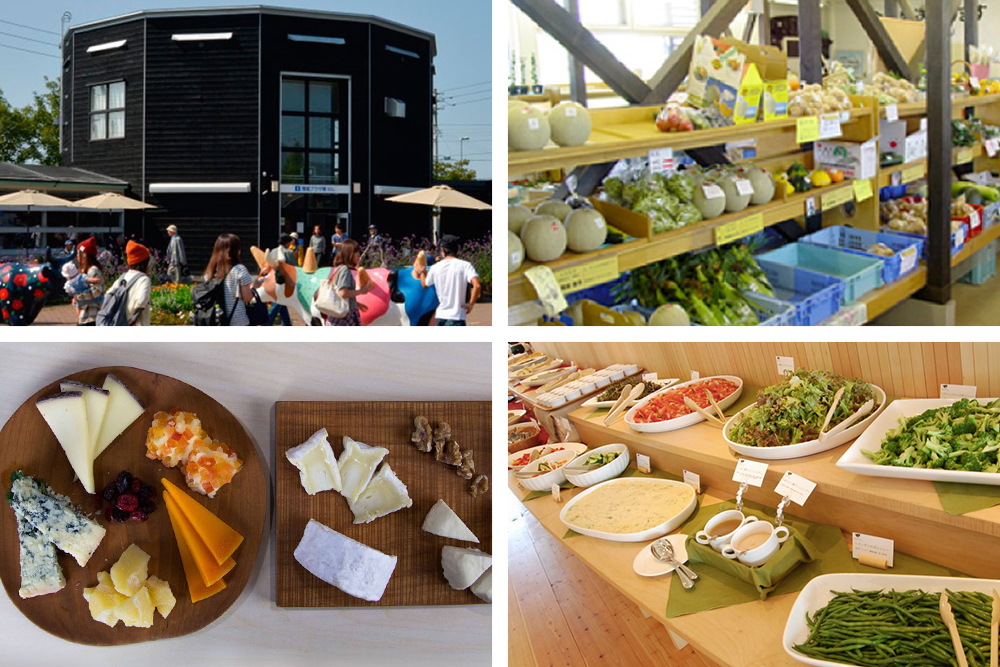 It is time to say goodbye to Niseko!

Early in the morning, Mr. Saito went on his way to the JR Shin Hakodate Hokuto Station.

During his time here in Niseko, he went shopping in beautiful stores, learned about Niseko’s history in the Arishima Memorial Museum, used the Yu Meguri Hot Spring Pass to enter 4 different hot springs. You can say he enjoyed Niseko to the fullest.

“Niseko offers the same level of service as the city, and lets you relish nature at the same time.”

“I feel like something was added to my life.”

“Of course, I look forward to bringing all my colleagues to Niseko for a workcation!” These and many more kind words were shared by Mr. Saito.

Thanks to him participating in the workcation, we came to a lot closer to establishing workcations in Niseko and learned much about Niseko in the process. It was a week full of results and valuable lessons.

Confronted with the Corona pandemic in June 2020, Mr. Saito decided to let the whole staff of his company work from home. Since his child was still young, he also used this opportunity to move to Aomori.

In Aomori, he lives surrounded by nature and goes fishing five times a week. On weekdays, he works remotely from his home and uses ZOOM to communicate with his staff.

©OTOKORO.com’s service lets you search and compare facilities all over Japan. Compare different types of facilities or stores regarding their prices and customer reviews.

1STOP BUSINESS CENTER is a virtual office service that supports entrepreneurs, workers with side jobs, and freelancers to fulfill their needs on the job market.