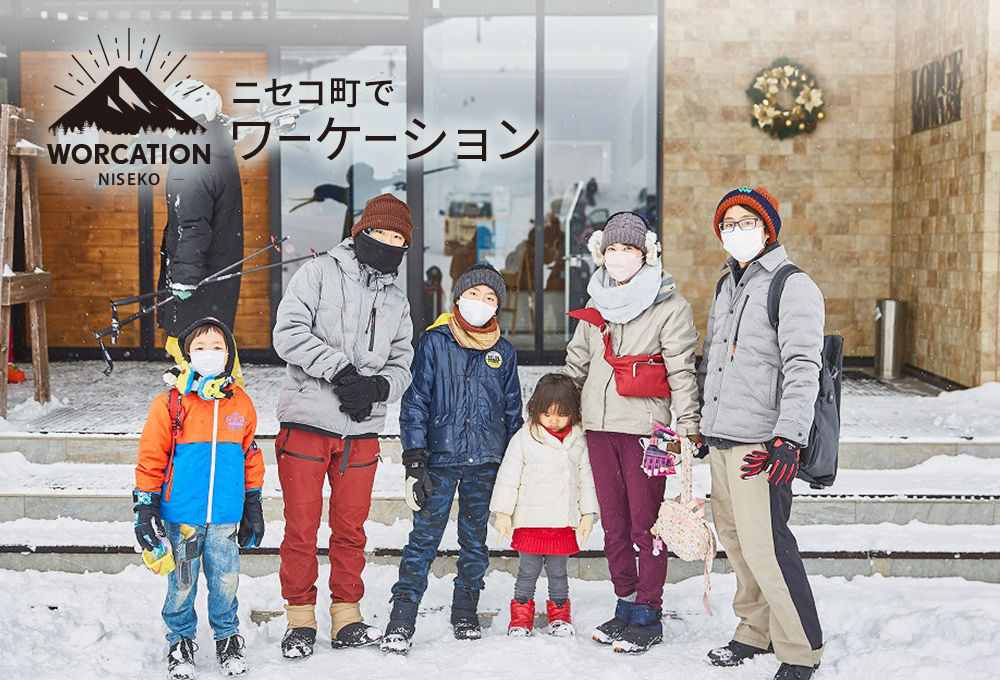 You know already that we wrote about a workcation in Niseko during autumn. This time around, the Mikawa family from Ciba came to Niseko for a workcation. But what is a workcation again? It is a new work-life balance concept where you work while enjoying yourself on a vacation.  For the Mikawas that means going skiing or relaxing in a hot spring, and they chose the best time of the year to do so, the end of December! From December 24, 2022, until December 30, 2022, we followed the family on each of their steps to share their experience with you.

This workcation was made possible through the help of 1 Stop Business Center, which formed a collaboration with the Niseko Town in 2019. This Workcation program was made possible by 1 Stop Business Center which recruited participants through its members, and combined efforts of the Niseko Town, Niseko Chuo Soko Gun, and Niseko Resort Tourist Association.

Arriving in Niseko from New Chitose Airport via Niseko Chuo Bus! While still on the bus, they were marveled by the scale of Lake Shikotsuko an experience which immediately made them realize everything is a bit bigger in Hokkaido. Though marveled, all are tired from the long trip. 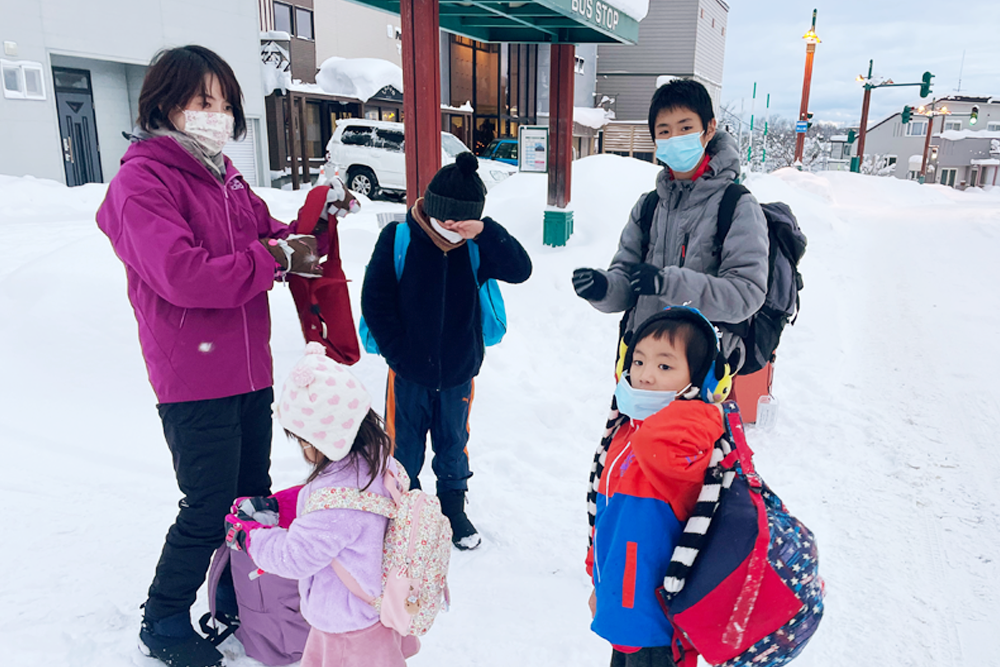 Arriving in Niseko via bus

Since there is no car rental service near the bus stop, one of our staff members picked them up by car and brought them to a nearby car rental in Kutchan, the neighboring town. Ready with their new car, they went straight to Bongo Hiroba, where the cottages look like they came straight out of a Christmas movie.

The Mikawa children experienced snow only a few times and were blown away by the abundant snow! 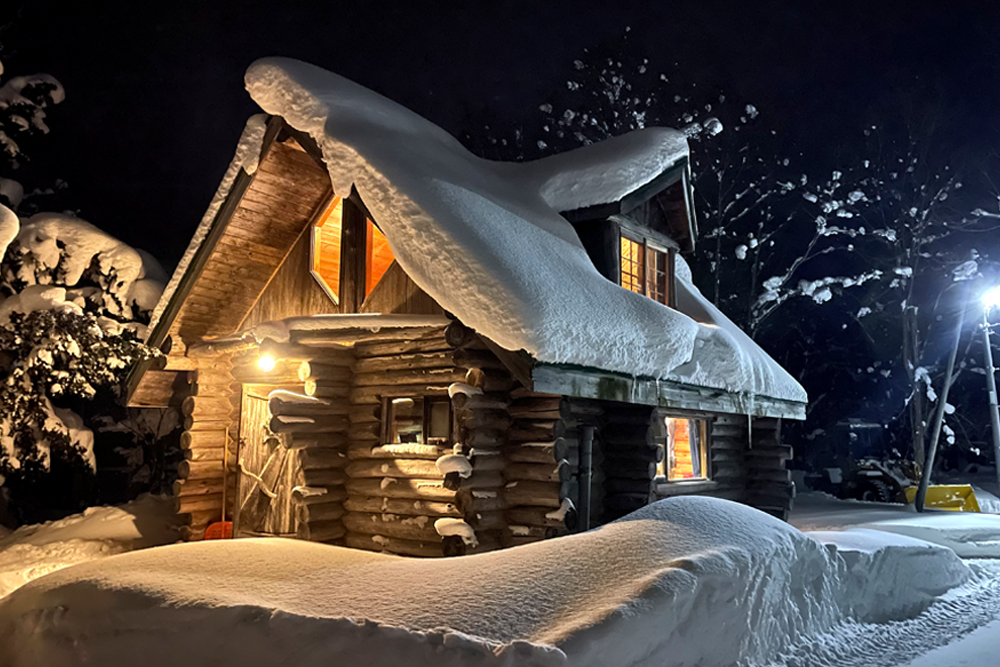 One the second day, the Mikawa’s went to the Niseko Chuo Soko Gun for an interview, and so that they get to know the staff. Once everyone was familiar with each other, it was time for the Mikawas to ask the facility manager a few questions. 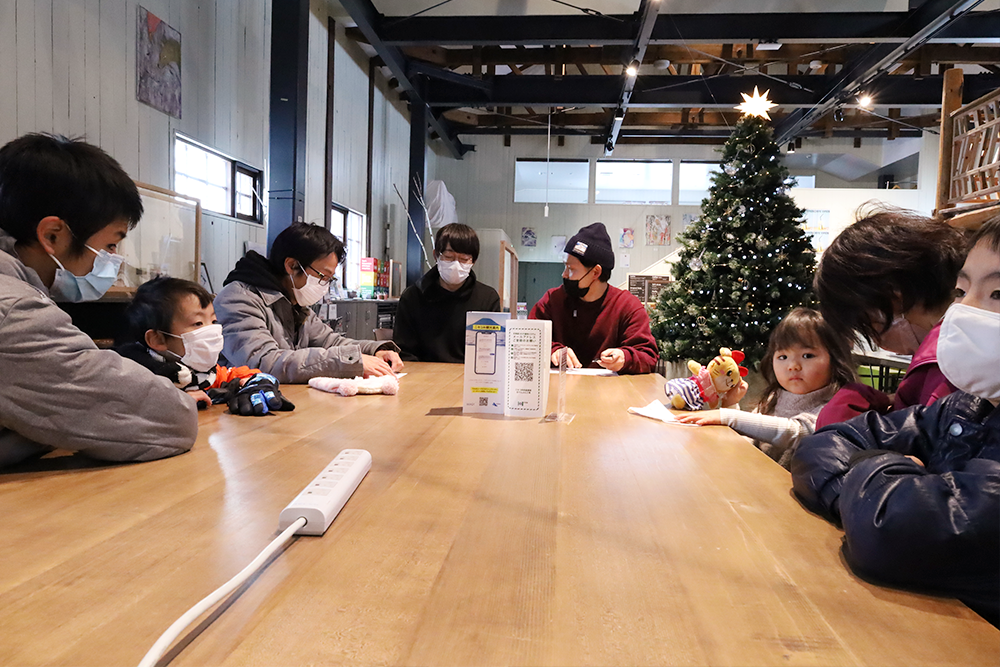 The whole family participating in the meeting

Though the children soon started playing to their heart’s content in the kid’s corner, after they had finished playing, they joined papa doing his work and went on with their winter holiday homework. While busy working, all ordered something to drink in from the Niseko Chuo Soko Gun Café. 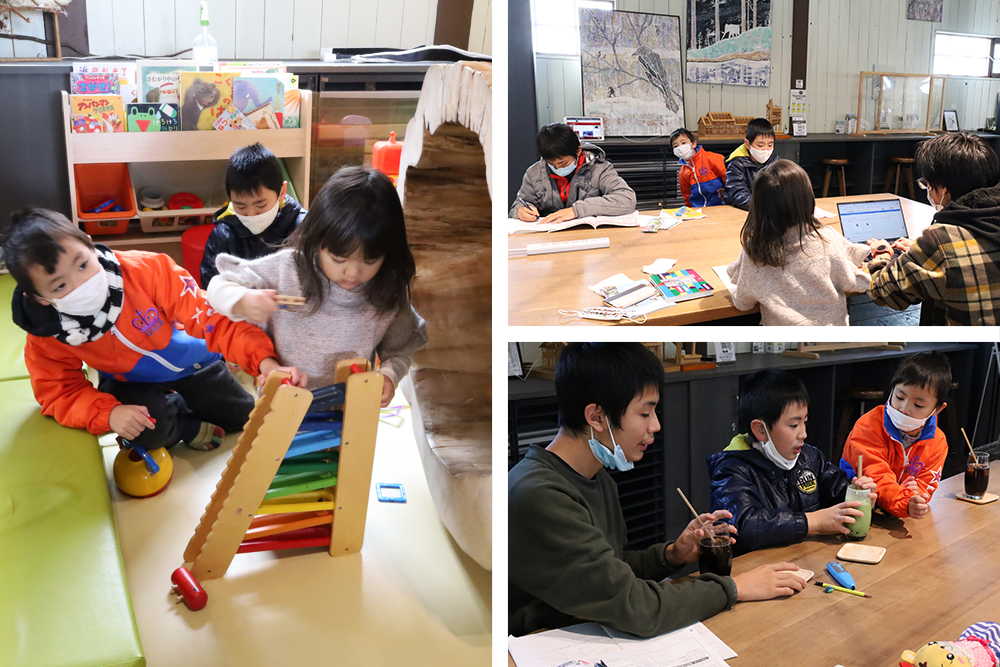 Especially during the winter season, the Niseko Chuo Soko Gun kid’s corner is a sought-after place since kids can play there safely and stay warm at the same time. The Mikawas also made use of it many times during their stay in Niseko.

On the third day, we all went to the Niseko Chuo Soko Gun’s Warehouse No. 1. Here, Mr. Mikawa worked in a tent during the morning, and the children watched a movie with their mother. Of course, the warehouse offers more than just miniature cinema! The interior includes play equipment like skateboards, a trampoline, and a slide. According to Mr. Mikawa, the tent provided just enough privacy to fully concentrate on his job while also giving him the opportunity to enjoy the presence of his children. Thanks to that, he was able to relax and work efficiently for the entire morning. 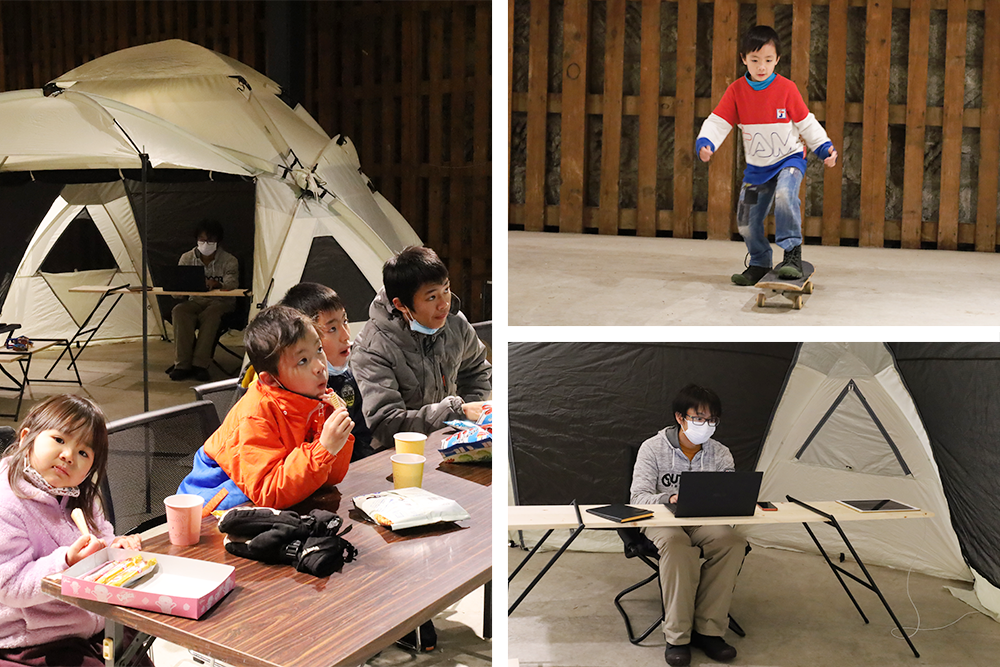 In a tent, it is surprisingly easy to concentrate on work

In the afternoon, I enjoyed a lecture on SDGs in Niseko Town by Mr. Takashi Terachi, a regional revitalization cooperation team, and a Christmas wreath at Macaroni with an international exchange member. The international exchange staff and the children got to know each other immediately and played catch even after making the wreath. 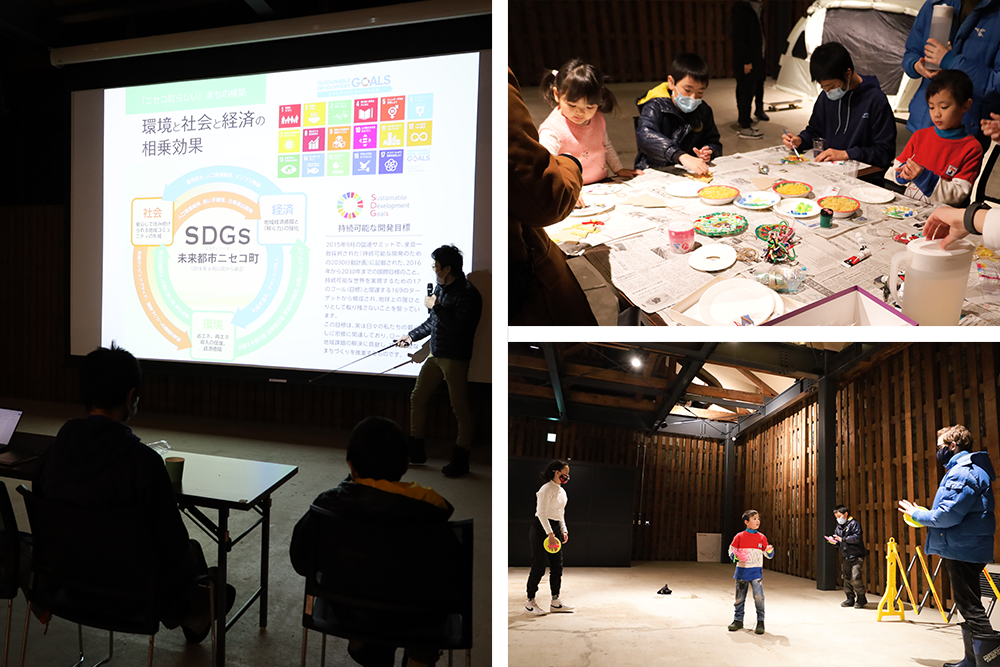 I also explained the efforts of Niseko Town.

Take a commemorative photo with everyone with a macaroni wreath. 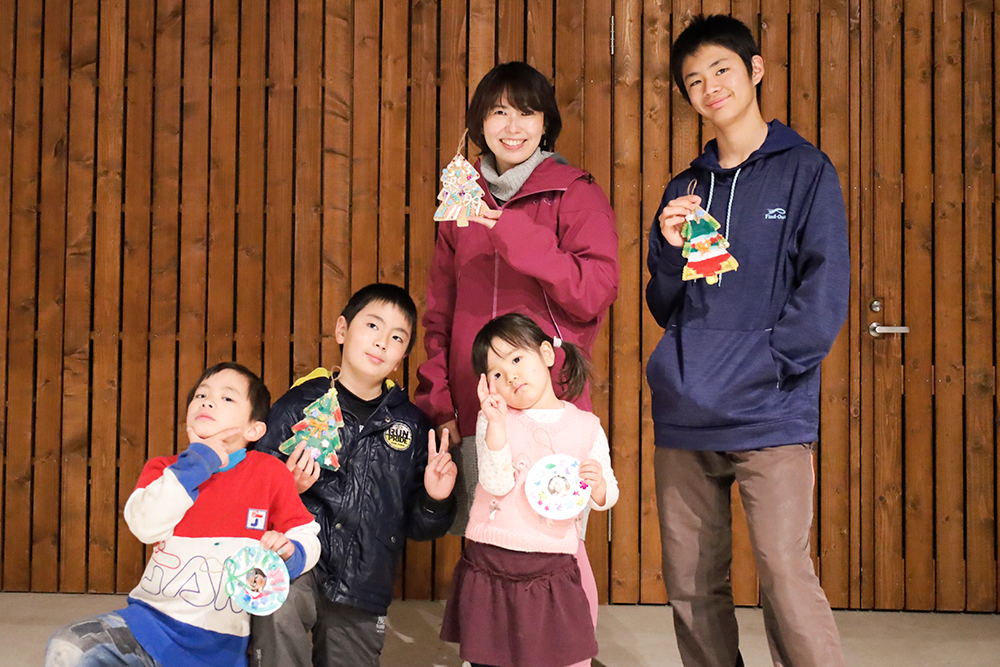 I made a cute wreath while having international exchanges with foreign staff working in Niseko town.

The 4th and 5th day was spent at Niseko Moiwa Ski Resort. Ms. Mikawa, the third son, and their daughter played in the snow, and Mr. Mikawa and the eldest son went skiing, supported by Mr. Kamada and Mr. Yasui of the Niseko’s regional revitalization group. With two experienced instructors, the children had their first ski experience in Niseko’s powder snow!

The youngest son and the daughter played sledding, to which they got used to immediately and repeated it many times! 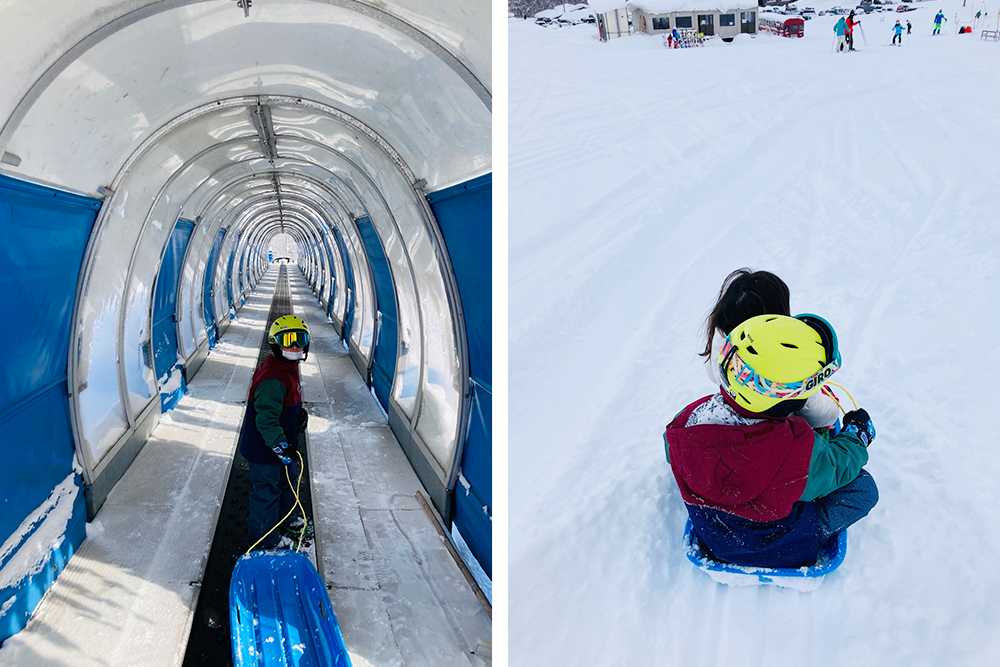 There is a conveyor belt so you don’t have to walk up the slope all the time, which is very convenient!

Next, the eldest son puts on a ski and practices the stopping motion for skiing.

Niseko’s snow is fluffy and doesn’t hurt even if you fall. So, just fall and get better along the way! 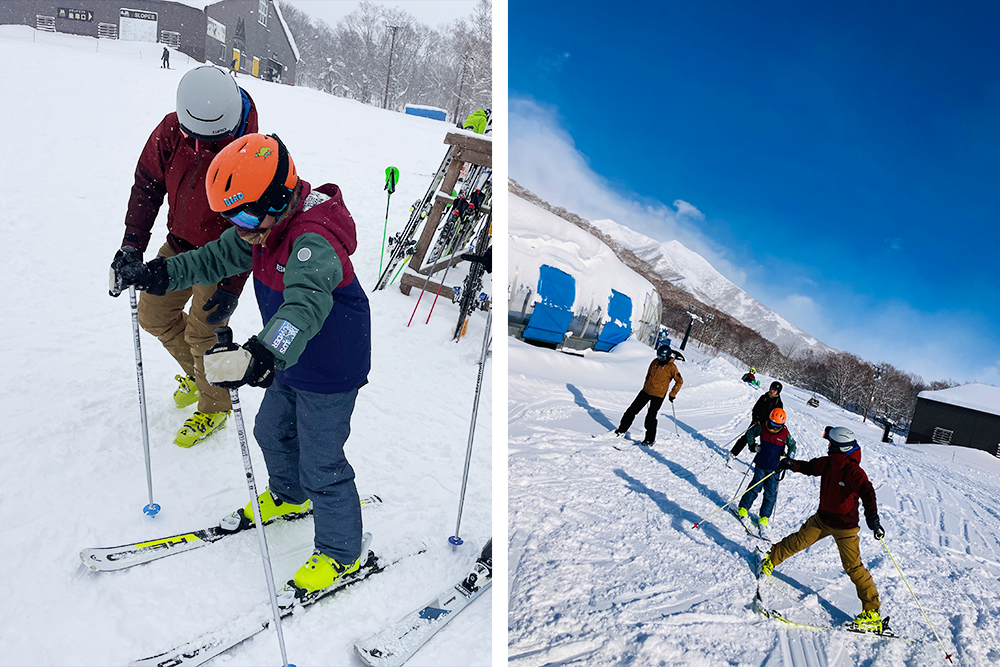 Since it doesn’t hurt even if you fall, the kids improved steadily

The weather in Niseko is volatile, but the clear ski slopes are spectacular. 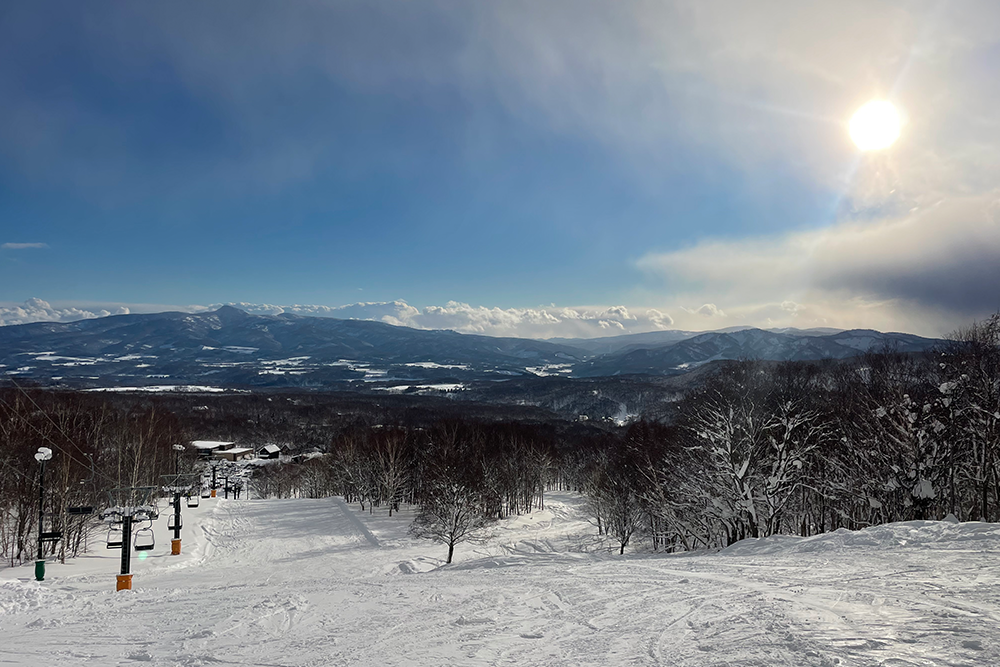 The scenery and mood are great when the weather is nice

The second day of skiing. The youngest son also wants to experience skiing and joins the ski group!

And, of course, the youngest son and the second eldest son immediately improved and proceeded steadily through the forest course of Moiwa. They even got the nickname of the kamikaze captain …

The whole family enjoyed it!

Finally, a commemorative photo with everyone. The children started to get used to skiing a little, and it looks like they would love to come to Niseko again next year to continue skiing. 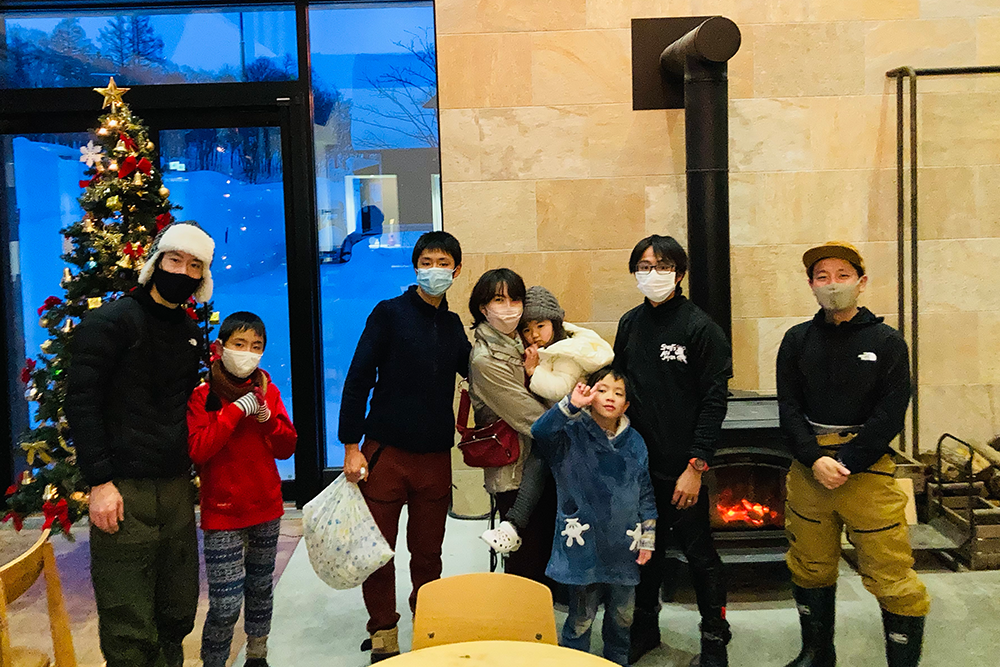 At the end, a commemorative photo was taken in front of a warm fireplace with members of Niseko’s regional revitalization group.

Today we spend some time in the Niseko Townhall!

The Children played with wooden playsets and read picture books in the kids’ space on the first floor of the office. In the free space on the 3rd floor of the government office, it is possible to do your homework during the winter vacation. Mr. Mikawa interviewed the staff of Niseko Town Hall. 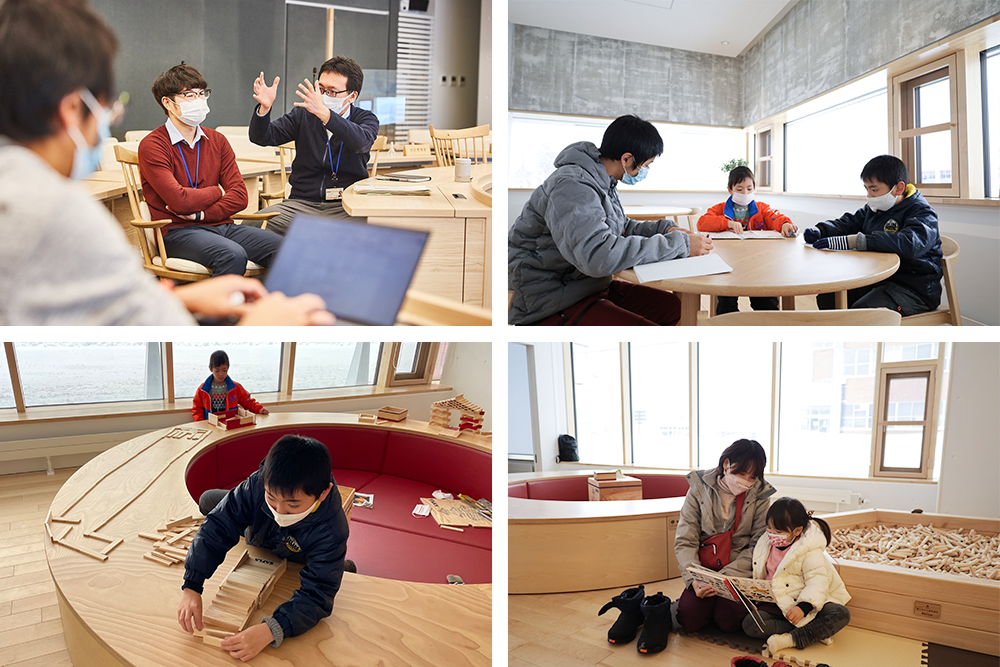 The newly built town hall has also a kid’s space in the new.

Later, Mr. Mikawa had an in-depth conversation with Kenya Katayama, the mayor of Niseko, and Shinya Tsuchimoto, the representative of the One-Stop Business Center. The two of them listened to the story of Niseko’s mayor about the town’s future, and it seems that it was a fun conversation through and through. 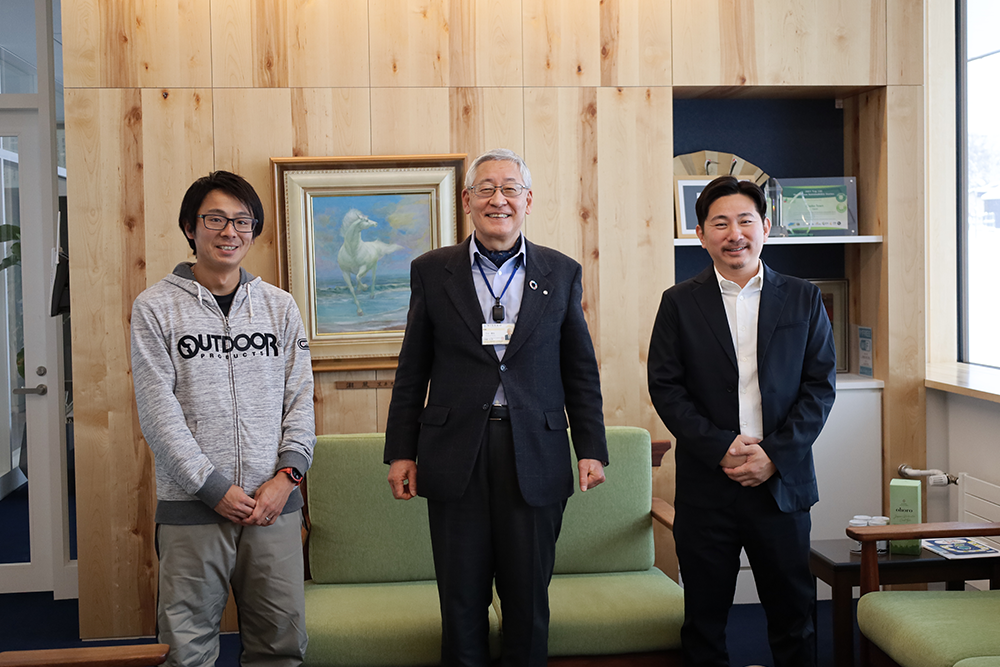 Later that day, Mr. Mikawa went running in on Niseko’s snow-covered roads since he is a passionate runner, who had already gone on 100km marathon, etc. Mr. Matsuda, a member of Niseko’s regional revitalization group, and Mr. Mikawa’s eldest son followed his lead.

Judging from the picture, the three had a lot of running through Niseko’s snowy streets. 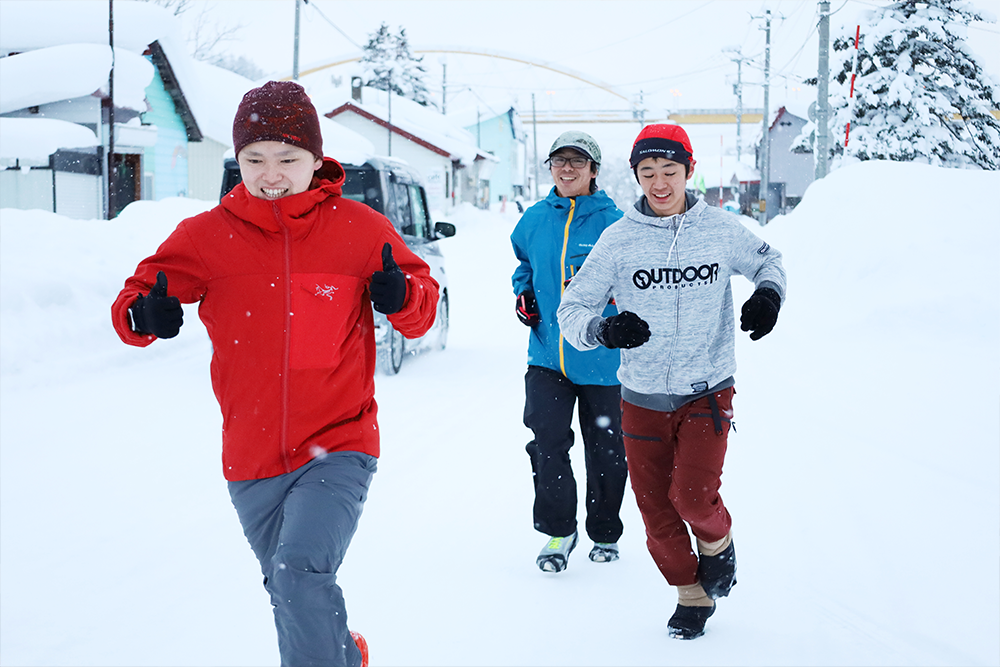 Unfortunately, it is time to go back. The Mikawa’s woke up early today so that they reach the New Chitose Airport in time.

During their stay, the family enjoyed Niseko’s hot springs such as Kira no Yu, Kanro no Mori, Yuki Chichibu, Ikoino Yuyado Iroha, and Yuyadonkaku at a discount price with the Niseko Yu Meguri Hot Spring Pass. The children in particular enjoyed the daily hot spring visits. 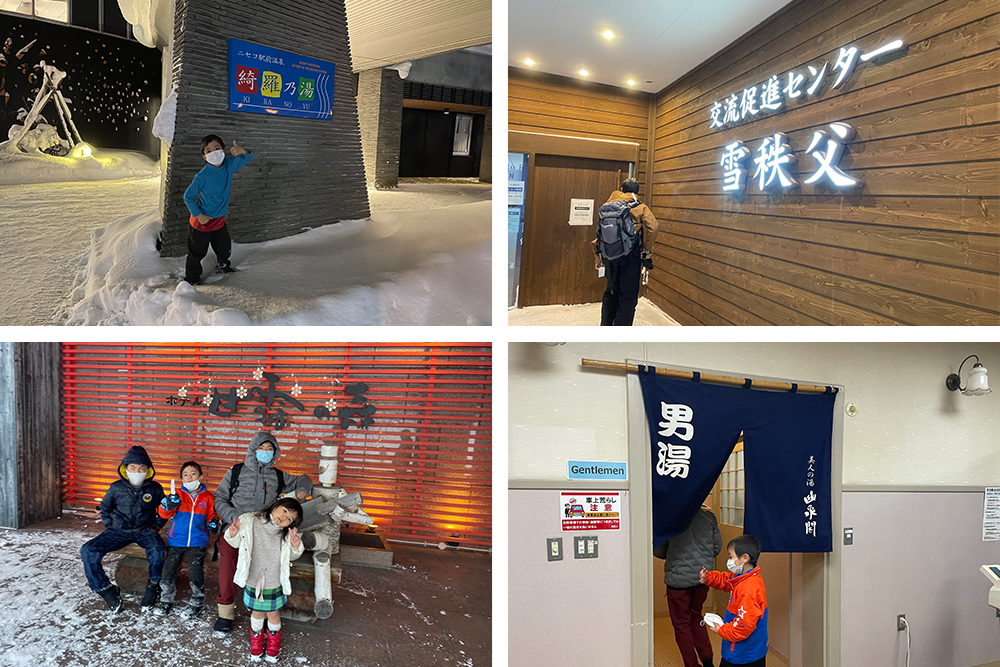 There are many hot springs with different spring qualities in Niseko which makes it difficult to choose.

Looking back on the workcation, we received much advice from Ms. Mikawa, “From the start, I thought it would be nice to go on a workcation with another four families. If the workcation schedule is properly planned, moving around and participating in various activities should be easy.” “Also, having a lodge with a kitchen, makes it easy to prepare food for the kids when they are hungry, which makes staying all the more convenient.” “It would be even better if there was a guidebook for tourists with kids! In case the kids get sick, I would want to know where the nearest hospital is located, or what clothes to bring depending on the season.” These and many more opinions from the perspective of a family were shared with us.

That was the Mikawa family workcation in Niseko!

At first, we wondered how the four children would spend their time here during Niseko’s snowy season. The answer was simple when outdoors, they played in the snow or went skiing, and when indoors, they played in Niseko’s various kid’s spaces or did homework while dad did his work. So, all in all, they used their time to the best effect in Niseko. In the end, the Mikawa family left Niseko with the feeling of wanting to come back. They would like to come back in the winter for more skiing, as well as to come again to Niseko Town for a spring, summer, or autumn workcation.

Kenfumi Mikawa is a “running” freelance writer! Focusing on sports, he is involved in coverage, writing, and editing in a wide range of genres. He has 16 years of experience as a writer and 8 years as an editor, CEO of Knowledge Links Co., Ltd., and a running coach. He is a large family of three sons and one daughter.

During the workcation, he posted on the following SNS at any time during his stay.

“One Stop Business Center” is a virtual office service. Through the “One Stop Business Center” business support service, entrepreneurs, side businesses, and freelancers are able to enjoy their free working style. Since many virtual office users usually move from place to place and take their work with them, we believe the workcation is a perfect fit for them, many of them know about it or are thinking about trying it out.

For more about the collaboration between Niseko Town and the MOOR Company, please check out the link below.

With this workcation, two model projects, one for singles in the fall and one for families in the winter, have been completed.

For a single person in the fall, Mr. Saito, a company manager shifted to full remote during the corona pandemic. He was able to work efficiently in Niseko’s workspace while being impressed by Niseko’s nature. He in particular liked rafting and fishing, experiences he would like to share with his own employees. He thought of doing a workcation for his employees for refreshing and team building. For a full-remote company, a workcation is a great opportunity to organize a kind of company event.

The Mikawa family in winter experienced powder snow skiing, and went to various kid’s spaces and workspaces. For them it was possible to do work even at the ski resorts since wifi is readily available anywhere. If you’re traveling with children in the winter, you’ll have less choice activity-wise, but you can always experience skiing or relax at the Niseko Central Warehouses.

In the two model projects, we proved that Niseko is a suitable place for workcations. Especially so, for those who enjoy remote work while following their hobby, and those who have a work style that values ​​family time.

From now on, we would like to build a better workcation environment based on the feedback received from these two model projects.

We would appreciate it if You would consider Niseko Town as a workcation location on Your workcation website.